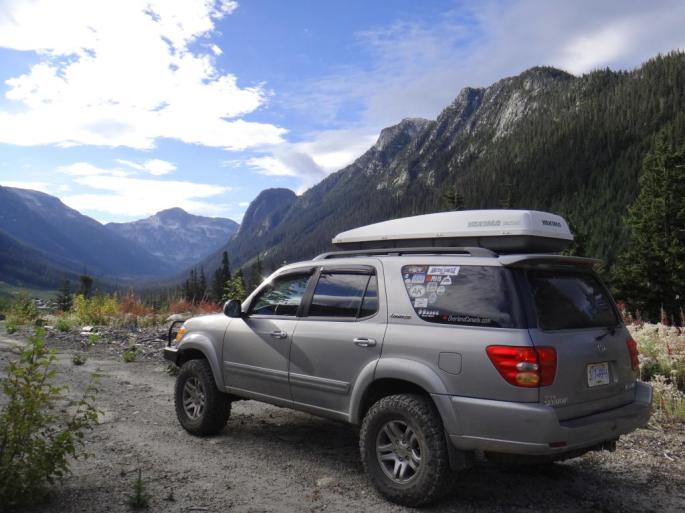 Part five of a solo trek to the Shulaps area of British Columbia… Previously published on Overland Canada in 2014.

After the stressful (read: fun) parts were over, I had an uneventful drive back into Lillooet. I grabbed an americano java at one of the two coffee shops in town, then continued south. I didn’t bother airing up the tires as I knew I only had about 100km of paved road before I’d hit the dirt again.

I had yet to complete the Boston Bar to East Harrison FSR traverse via the Nahatlatch/Kookipi roads. I figured this would be a good way to get some more adventure in before heading home the next afternoon. It was dark as I made my way south on Hwy 12 to Lytton and then on Hwy 1 to Boston Bar. I gassed up in Boston Bar to ensure a full tank, then crossed over to North Bend, ignoring some shady looking hitchhikers in the process, and pulled into a Rec Site off the Nahatlatch FSR for the night.

I had a quick fire and cooked some hot dogs, an unofficially required camp food, and hit the sack around 0100 hours. Being miles from any real town or street lights, the stars were insane that night – but I was too preoccupied in staring at them to snap a photo.

Here was my spot for the night as seen the next morning. Not a fancy looking camp when it’s just me and I sleep inside the truck:

The Nahatlatch River running behind my spot. I prefer the sound of running water to silence when camping.

Of course I had to make some java to start the day off. When it’s just me I find it easier to boil the water right in my mug then add the coffee. The Starbucks instant coffee is actually pretty tasty.

Another shot of the river:

Once you leave the pristine Nahatlatch area and begin up the Kookipi, things start to change. The Kookipi is heavily logged.

I took a side road to get a view at Mt Nesbitt. The road got pretty bushy fairly quickly and I didn’t go more than 3-4 km. It clearly isn’t used very much.

I did get a good view of Mt Nesbitt at the head of the valley though. The white patches are actually remnants of a glacier and not snow:

A look at my “setup” in case anyone was curious. You definitely don’t need to spend a lot of money to get things functioning nicely. We built a rather simple sleeping/storage platform out of materials from the Home Depot. The Sequoia normally has three rows and seats 8 people, however we’ve removed the third row and store the seats in the basement. The platform sits behind the second row when not in use, or when someone is seated in the second row. The seats and platform fold 60/40 so it can be versatile too. When the second row is folded down, it acts as the support to the folding and front portion of the platform. Underneath is just high enough to fit bins, a 10 x 10 shade canopy + other storage, and in the bottom corner is a cutout to fit a 20lb propane bottle.

The sleeping area is almost 7 feet long and is 4.5 feet wide, so plenty of room for two adults.

I don’t have any fancy technology going on here as you can see… BC Backroad Mapbooks and Topo Maps Canada app (free) using the built in GPS on the iphone… Maybe someone can help me and provide some suggestions for improvement in this area!

If I get really lost I’ll stick my head out the window and look where I’m going. So far so good.

There was this area of one of the creeks/rivers… can’t remember which one – but it was a cool place to explore:

An interesting canyon further down the road:

Closer to the Harrison Lake side there was some major industry going on…. Looked like they were building a run of the river project for hydro electricity. This was the first vehicle I had seen since I woke up that morning!

I finally made it to Harrison Lake – its about 60 km long, 9 km wide and only 10 m above sea level (for those not familiar). It’s glacial fed from the north end, but can get warm enough to swim in during summer. On this day I did not test the temperature because it looked cold enough!

Soon after that view I was back on pavement after 100 km of dirt. The yahoos from the work camp were passing me on the forest road and were driving like maniacs, but that’s no surprise. I went into town, grabbed a burger and drove another hour or so to get back home. Overall it was a great trip and I got to see many new areas. I enjoy going on trips alone but it’s usually more fun when others come along, whether it’s family or other adventurers in their rigs.

By the time I got home after driving through rush hour traffic, I wanted to go back to the bush again…