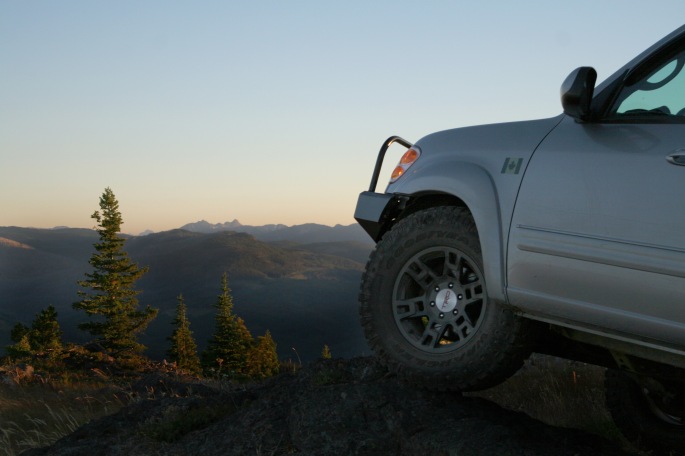 We’ve recently returned from a week-long excursion around the Okanagan, Shushwap and Nicola areas of Beautiful British Columbia. We spent a few days in a *gasp* provincial park campground in the town of Okanagan Falls, and lazed around the beach – visiting with family for a few days.

With temperatures at 35 degrees (95 fahrenheit) being warmer than almost all areas of Canada, it was nice to be lakeside. The forest fire smoke from across BC and WA State was rolling in and out of the Okanagan Valley, which made for dramatic sunsets! After a few days camping near town we opted to head to the hills and seek cooler temps.

We found our next camp at Sawmill Lake Rec Site. The access road has steep sections with loose surfaces and large ruts.

This was also the first time we were able to get our new wheel/tire combo dirty and put to proper use.

We arrived at dark and turned in for the night after a quick setup. We were only a few thousand feet higher than the valley bottom, but the temps were quite a bit cooler and the breeze was welcomed. We got our proper view in the morning through the Kakadu’s screen wall option:

The Mrs. isn’t always a fan of surprise early morning photos, but she smiled right after – honest!

We slowly made our way out of the Okanagan area and spent some time in the Shuswap, seeking out more lakes and rivers in which to swim. There are numerous backroads all over and endless places to bush camp. We camped up high enough that we actually slept under sleeping bags for the entire night. I suppose the wild wind had an influence in the temperatures – the gusts were strong all night and we used a total of nine twelve-inch pegs to secure the tent to the ground. In the morning we even slept in and made bacon, eggs and coffee to start the day.

The roads around here were very dusty as the area hadn’t seen rain in weeks.

Taking the backroads, one always expects some form of trouble or another. Here we came upon an old washout which was just wide enough for us to squeak through… even if the dirt was crumbling underneath the tires on both sides!

We wound our way south-west, avoiding the highways and wildfire areas and even escaped the smoke for awhile. Here we came out onto the back end of the controversial Douglas Lake Ranch.

Plenty of roads and open range, some of the roads gated with blocked access to public lakes – hence the controversy.

We had no issues as we kept to the obvious roads and stayed out of the areas marked private. Despite the controversy, the Douglas Lake Ranch area was pretty interesting. You can read about it here.

We wound our way back to civilization to fill up on water and fuel and continue to an area that has peaked my interest in the past. Shovelnose Mountain, above the community of Brookmere. We were happy leave pavement again and get into the bush. It wasn’t just any pavement we were leaving, it was the famed Coquihalla Highway, as seen in the popular Discovery Channel show Highway Through Hell.

We crawled and climbed our way up the ATV trail to the summit, with our faithful Kakadu trailer bouncing along happily behind us. We were treated to a smoky sunset at the top of a mountain to finish off our trip. It felt a bit like we were in another world – it was dead silent but the views were changing by the minute. I scrambled around like a child, hopping from rock to rock and snapping photos. I’ll leave some of them here to finish off this post.