In April 2019 I headed out solo to a rugged area in the northern Cascades mountain range, just south of the US/Canada border. This was a quick solo trip for about five days or so. The “operation” part of the plan was to accomplish several objectives:

1) Explore somewhere remote;
2) Have some down time in camp to unwind and enjoy the quiet;
3) Get some miles in on the mountain bike;
4) Have fun.

Day one was spent cruising east through Manning Park before camping up high in the hills above the town of Princeton.

The night was a quiet one under a full moon with the lodge-pole pines blowing in the wind. There was a grouse doing his mating call all night. No campfire, just sleep.

Day two had me mountain biking the old Kettle Valley Railway trail from Princeton to Coalmont and back, then back into the truck to head south across the border that evening.

I successfully crossed at the Osoyoos, BC – Oroville, WA border checkpoint, after several confirming questions from the border officer. Apparently mentioning that I’m going camping in the Pasayten Wilderness alone is a bit of a hot topic – I suppose it’s all the cross-border smuggling which occurs there, since it’s a remote wilderness area.

You can read here about the Pasayten – in short, it’s awesome:
https://en.wikipedia.org/wiki/Pasayten_Wilderness

Once into the USA, I filled up with cheap american gas in the border town, then went west on the country roads south of the border along the US side of the Similkameen River.

Looking for a place to camp, I found a gravel pullout that led down to the river at the valley bottom.

The little road down to the river paid off, as I ended up on a small lake above the Enloe Dam. It was 19 degrees Celsius overnight, with still air and many jungle-like birds making noise throughout the evening – I felt like I was somewhere tropical.

In the morning I walked down to check out the dam. 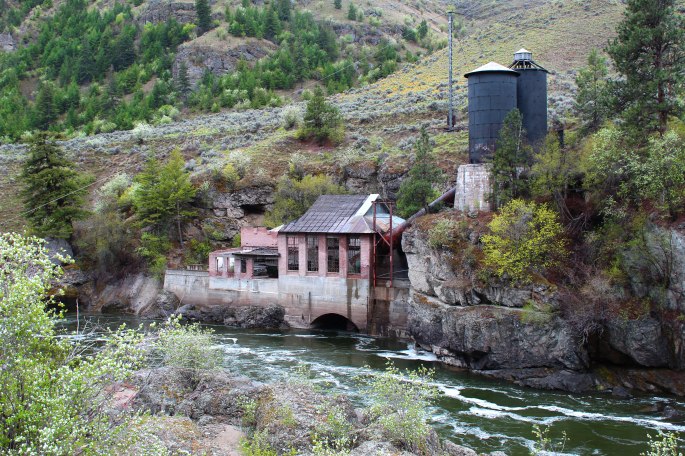 Remember where I said that the area is used by criminals smuggling across the border? Well I guess the sight of my truck parked in the area early in the morning was highly suspicious.

This was a Colville Tribal Police officer on secondment to the border patrol, who apparently felt my British Columbia plated truck in the area needed a closer look. After a few minutes of pleasant conversation he wished me well on my adventure!

I played on a few of the optional routes in the valley, then continued east to the Nighthawk area – beautiful. 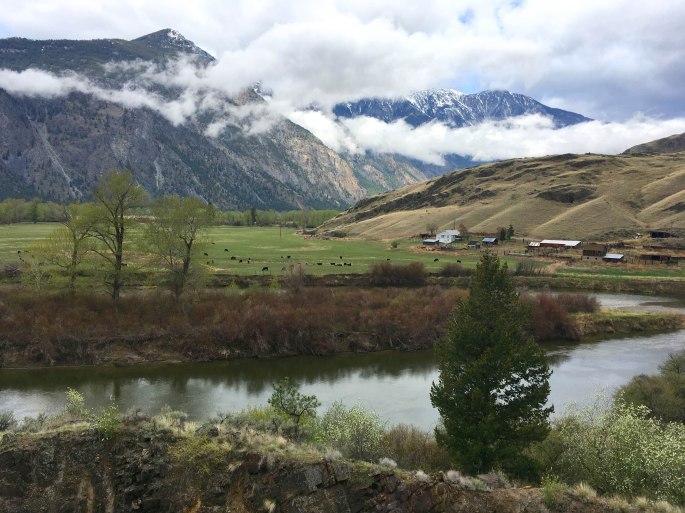 Refueling again in the happy country settlement of Loomis, I climbed up the Toats Coulee toward the high mountain area between here and Winthrop – the heart of the Pasayten.

I climbed thousands of feet on the forest road and was happy to not see any other vehicles along the way. Eventually, at one mile above sea level, I hit snow. Deep, sloppy spring snow. From the dry pavement to the snow, it was about a foot-high ledge as you drove up onto the soupy mess. I managed to continue for another mile or so until the snow deepened and the grade increased. I still had another 1000 feet of elevation to climb before making it over the pass. At some points you could drive on top of the snow, but then you’d just sink. Unfortunately it was not to be… I turned around and setup camp at the snow line.

It was still early afternoon so there was plenty of time to gather firewood and explore the area around camp.

I found this interesting marker on a boulder adjacent to the road.

Night one I was joined by the grouse, night two was the jungle birds, night three was an owl! It was pretty close to camp, and was quite talkative overnight. I was also awakened by a really loud truck, flying up the forest road at about 0130 hours. It was gunning the engine and hit the snow at high speed, bogging down pretty quick. The truck was loud, and driving extremely aggressively. I laid there trying to make sense of it all in my sleepy state… I heard the truck fade into the distance, still redlining the muffler-less motor and making progress through the snow. After a few minutes I couldn’t hear it anymore – it was either stuck, or made it far enough away that I couldn’t hear it. Bizarre.

Two hours go by, and around 0330 hours the truck came back, still driving like a maniac! It was now heading downhill, back toward civilization at full speed. It must have hit 80 km/h (50 mph) as it went by my camp. I guessed it was either a stolen truck out for a joyride, or possibly someone on the run from border patrol? Either way it added an interesting flair to the evening.

In the morning I returned down out of the mountains to find an alternate way through the Pasayten. This cattle-ramp (not sure of the proper name) caught my eye. 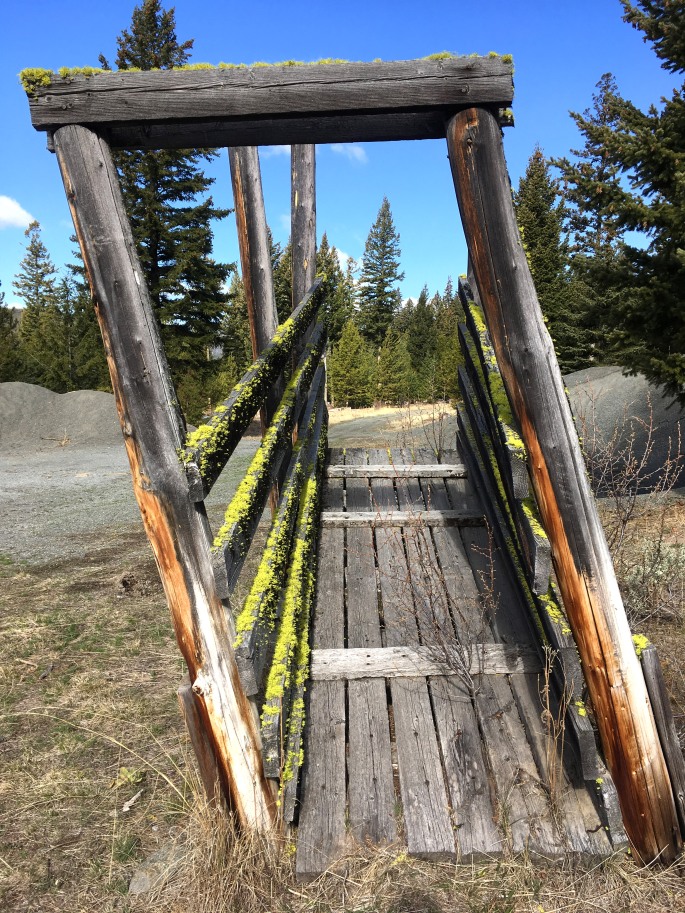 Finding an alternative route, I passed through the Sinlehkin Wildlife Area and came across a bona-fide cattle drive by a family of cowboys and cowgirls on horseback.

The backroads around Concunully lead me to discovering the old townsite of Ruby, a mining town that disappeared long ago. 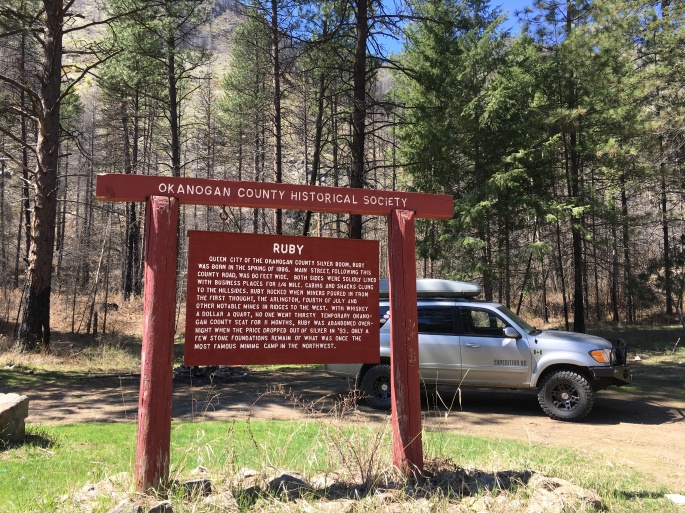 A nice 4×4 road led over the hills from here to Loup Loup Canyon, where I came across the “mysterious China wall” of 1889.

This was apparently created for a silver mine, but more can be read about the spot here:
http://www.ghosttownsusa.com/loop.htm
Continuing on, I made it to the nifty desert town of Twisp, where I enjoyed some coffee and a cinnamon bun at the Cinnamon Twisp Bakery.

The end of day four found me up the Twisp River valley in a deserted campground, spending hours by the fire reading maps of the area and planning future trips.

Continuing with the avian theme of camp guests, just prior to finding camp I came across a flock? of wild turkeys along the road. I followed them into the bush and tried to capture their mugshots but they were too fast. I’ll share what I took anyway.

In the morning (day five) I took the Elbow Canyon route from Twisp to Winthrop, a charming but touristy western-themed town.

I spent minimal time in town, but enjoyed cycling the twisty Chewuch River roads, stopping for breaks in the shade to cool down. Dinner was at my favourite Mexican restaurant in the world: The Carlos 1800 Mexican Cantina along the boardwalk downtown. In the evening, I once again headed for the hills but this time I angled north of Winthrop – this is the route I would have entered town if I didn’t get stopped by the snow up Toats Coulee.

Night five was spent beside rushing boulder creek. If there was any bird creature making noise that night, it was drowned out by the sleepy noise of flowing water. I didn’t take many photos on day five but rather enjoyed the time exploring.

Day 6 was my last and final day, but it was a full one. In the morning I attempted to drive up to First Butte, a peak with a road to the summit I had located on the map the night before. It was a massive effort to make an attempt, and I burned a bunch of fuel crawling up through the snow (this was becoming a repetitive theme). I was defeated, but eager to find a loop route though the mountains to return to town. Everything except for the highways out of town climbed up into the hills and was buried in spring snow.

Following a line on the map, I found a loop route that would bring me up over the shoulder of a mountain ridge, and back down into a lower valley with roads that connected to town. I was busy ramming through snow banks and making fresh tracks on this route. It was likely mainly used by quads and side-by-sides rather than a big ol’ Sequoia. This part of the adventure was the most exciting as I was alone, more than a day’s walk to a paved road, and really putting my driving skills and decision making to the test. Eventually I rammed through the last snow drift, making it to clear trails on the southern aspect of the ridge, and thus, reaching the new road system! I followed these trails down to the main forest road in the new valley, and south back to Winthrop.

The North Cascades Highway (SR 20) was freshly opened after the winter avalanches and snow buildup (it closes every year around November and re-opens late spring). This was the most direct route home and the winter scenery kept me awake for the five hour drive west to the coast, then north to Canada.

It was a hugely enjoyable solo trek and I think I accomplished all the objectives I laid out. In total, I logged over 70 kms on my bike, mostly off road. After all, it’s difficult not to enjoy any time spent in the outdoors, despite the pesky birds and soupy spring snow blocking trails!

The Pasayten area is ripe for a group trip, perhaps in late summer when the snow has melted in the high passes. Roam Wild 2020 perhaps??